During the first week of December a new marine radar (x- band) has been installed in Cape Higher with the help of Euskalmet, in the framework of a new collaboration between AZTI (Spain) and the Helmholtz-Zentrum Geesthacht center (HGZ, Germany), within SusTunTech project leaded by Marine Instruments (Spain).

One of the main aims of the SusTunTech project is to study the feasibility of integrating an innovative source of ocean data from instruments commonly used for navigation and fishing activities. The scientific x-band radar developed by HZQ allows to recover ocean current and wave data that could feed European open data aggregators (e.g., EMODnet and Copernicus). They will serve first as in situ data and second, for the assimilation/assessing of oceanographic model simulations. In turn, outputs from these oceanographic models will be used in SusTunTech to improve the development of fuel consumption reduction strategies.

This scientific x-band radar monitors wave’s period, longitude, and direction; as well as surface currents of the area covered by a gyratory antenna. It has been located in the proximity of a HF radar system, which also provides surface currents and wave information but covering a higher spatial coverage and a lower spatial resolution. Although they do not have an overlapping footprint, the data obtained from this experiment could be used in the future to assess the complementarity of both radar systems. After this experiment, that will allow a first contact of the SusTunTech team with this technology, it is expected to move this easy-to-carry X-band radar to the south western French coast to study the impact of marine extreme events in the coastline. 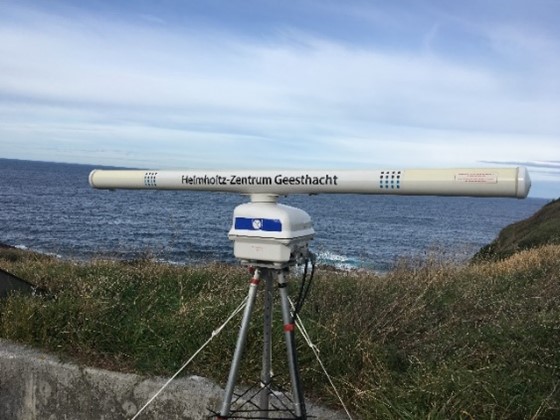